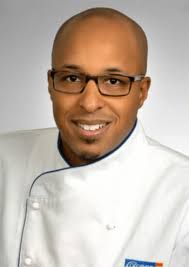 Warren Ford has been a chef for over twenty years, and been around kitchens for almost 30. A member of the culinary faculty at George Brown College, he started back in 2008 on a part time basis. Then in 2015 was hired as full time faculty position with the Centre for Hospitality and Culinary Arts. A former student and graduate of George Brown’s culinary program, he now feels privileged to be able to bring his skill and knowledge to the educational forum.

Chef Ford has international hotel and resort operations experience having worked in locations such as Grenada, Miami, Bermuda, and Italy. As well, his experience at local restaurants include Wayne Gretzky’s, 360 (CN tower), and Paese Ristorante. Chef Ford was also Executive Chef for resort style retirement facilities in Toronto, with a focus on upscale nutritional dining. His latest challenge has him representing Ontario in culinary competition at the CCFCC National Conference in 2016.

Chef Ford’s own philosophy on food and cooking is to keep ingredients as pure and healthful as possible. By assembling flavour profiles that can blend well but still speak for themselves, Chef Ford’s customers have enjoyed excitement in their mouths while they trying to figure that one elusive ingredient.