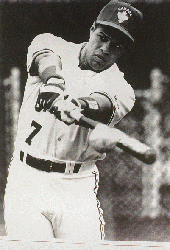 Robert "Mark" Smith, was born on June 27, 1959 in Halifax, Nova Scotia. During an impressive 25 year playing career he was considered one of the best softball pitchers in the world.

Smith had a desire to be the best softball pitcher in the world. Over an impressive twenty-year career at the world class level, Smith played in five different provinces as well as in southern California. He played for teams in Ontario, Alberta, Saskatchewan and British Columbia. Smith then moved to the United States. There he played for the Camarillo Kings in California and won two International Softball Federation World Championships. He was also selected to the all-world team a record five times.

In 1984, Smith traveled to New Zealand where he played winter ball. Even though Smith was traveling around the world, he played for the Canadian national team winning three Pan American gold medals in 1979,1983 and 1991 as a player and another as a coach. While participating in a tournament in Las Vegas, one of Smith’s pitches was clocked at 109 mph by a radar gun. The result of this feat was an invitation to the training camp of Major League Baseball’s, Kansas City Royals.

Returning to Canada in 1985, Smith sought to raise the profile of softball in Nova Scotia. In 1993, Smith and Keith’s Breweries signed a three-year commitment in which he would play and coach for the Keith’s teams. Nineteen ninety-seven saw Smith establish his own team, the Halifax Jaguars. In August of 1998, Smith completed his playing career, capturing his first Senior Men’s Canadian championship gold medal. In 1999, Smith was voted tenth among Nova Scotia’s top ten male athletes of the twentieth century. In 2001, Smith was named the head coach of Canada’s national softball program. Smith has been inducted into the Nova Scotia Sports Hall of Fame, the Canadian Softball Hall of Fame and the American Softball Hall of Fame (ISC).