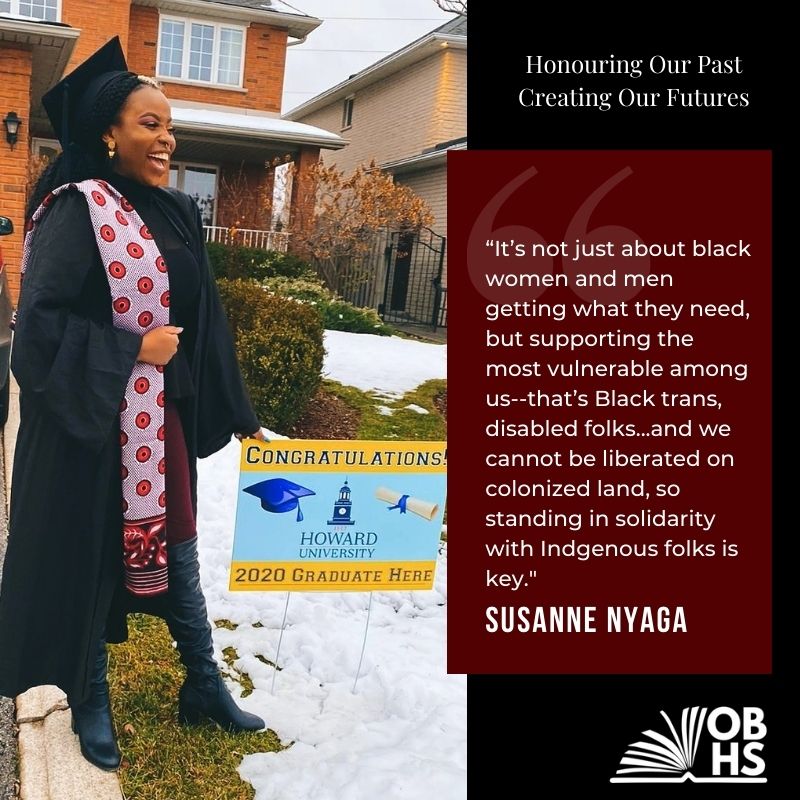 From Hamilton to Howard; making history along the way.

Susanne Nyaga made history when she became the first Black woman to hold Ryerson University’s highest student office as President of the Students’ Union.

“Being the first black woman to step into that role, it was clear that it was not prepared to be run by a black person,” she said.

Nyaga spoke of the double sided coin of leadership in predominantly white spaces. How on one hand it was taxing and toxic, while on the other hand, she developed incredible leadership, organizational, and managerial skills that she knows would have otherwise taken many years to develop.

She took those lessons and her Bachelors of Social work and wanted to expand in an environment where she could be among more like-minded thinkers, teachers, and professionals.

“I needed a professor who would understand the nuances of blackness. I needed to be taught by someone with the Black perspective to support me in building more direction in the problems I wanted to solve.”

She was encouraged to look into the Masters program at Howard University by one of her Black professors, so she did. In 2018 she applied and by the next year, she was accepted.

Being accepted into the Masters program of Social Work at one of America’s most famous Historically Black Universities was an exciting change of scenery for Nyaga. She felt a sense of calm and peace as she walked the halls and sat in classes as a normal person, not a spectacle as one of few, if not the only Black person in the hallway or classroom.

Growing up in a Hamilton suburb, Nyaga didn’t come up around many Black people. Ryerson wasn’t much different.

She felt nourished and refreshed by the privilege of being seen as an individual with her own perspective and lived experiences, rather than the single representative for all Black communities in the room, or what she called an ‘idea of me centralized in a caricature of blackness.’

Having spent the majority of her student career advocating for equity-seeking groups in Canada, she was interested in the ways that discrimination differed down south.

“Being in DC I could see the way black communities are really concentrated–which often means that the state violence is also more concentrated,” she explained.

“Canada has a niceness to our racism. We have a façade of Canadian are niceness and sweetness, but it’s really just fake… we have this idea of multiculturalism where we’re here to eat your food, ‘yes please, pass the samosas,’ but when you want actual systemic change, it stops there.”

Nyaga’s vision of liberation here in the Canadian communities she serves looks like building new systems rooted in compassion, love, and support, instead of violence and control.

“It’s not just about black women and men getting what they need, but supporting the most vulnerable among us–that’s Black trans, disabled folks…and we cannot be liberated on colonized land, so standing in solidarity with Indigenous folks is key.”

As someone long on the frontlines of advocacy and activism, she’s been grateful for the causes for pause that came in 2020.

“With the pandemic, atop the terror of covid, there’s this base of rest. The world slowed down a little. Many black folks were able to walk through the death and violence we know well, and enter a space of rest. There’s a lot of opportunity for self-reflection and care which allows us to invest in community.”

Through rest she has been able to find new ways to move and support the community within  niche corners of work, seeking to bring up the whole community as she does that work.

In the years to come, Nyaga pledges to put herself and her community first and to move unapologetically in her purpose. She aims to further cultivate her skills and talents, and promises to do so as she always has, while holding down her community.