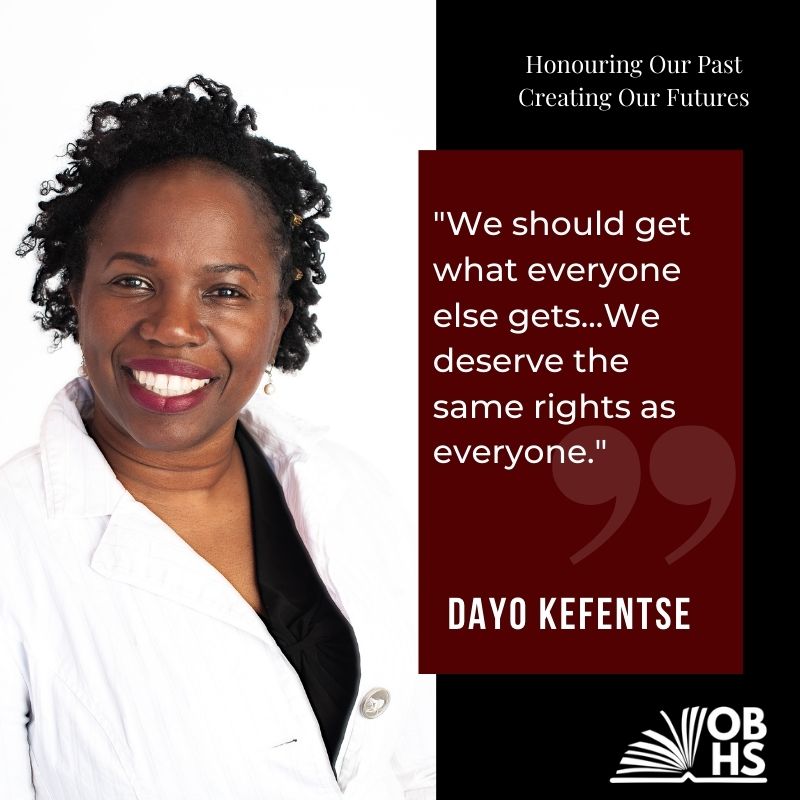 Dayo Kefentse is a Toronto-based communications professional who has built a rich portfolio over the last 21 years. Her decades of experience give her the confidence to expect and demand more.

After university she set her sights on a journalism career and hosted a Black community radio show, which led to an on-air career at CBC Radio in Toronto where she was featured on Metro Morning, the station’s well known public affairs program.  After getting multiple requests from members of the community seeking help in getting their stories told, in 1999 she formally launched her consulting practice, and by 2006 it was renamed DAYO Media & Communications (DM&C). Whether through her business or as a team member at organizations like the TO2015 Pan Am/Parapan Am Games or with post-secondary institutions like Ryerson University, Kefentse has helped uplift organizations across Canada, the U.S and the Caribbean.

At the time of our conversation she was finishing up her Master of Arts, Communications and Culture at Ryerson. Her thesis focuses on the experiences and cultural contributions of first generation Black Canadians who would be considered part of the cohort known as Generation X. She plans on producing an audio documentary that explores how Black Generation Xers approached activism in Toronto during the period spanning from the late 1980’s into the mid-1990’s.

Kefentse was born in Toronto and is part of a large cohort of Black Canadians with parents from the Caribbean. In the late 1960’s, her Barbadian parents came with a wave of young people who would make the most of the then new points system for immigration that was enacted in 1967. This system of admittance into Canada would lead to the multiculturalism policy initiated in 1971 by then Prime Minister Pierre Trudeau.

“Since many of us were born in Canada and are first-generation Canadians, we’re among the first to have gone through all the same systems as our white peers,” said Kefentse.

“Before others could have said ‘oh, well you don’t have the qualifications, or you don’t speak the right way‘…now that doesn’t work,” she said.

“We should get what everyone gets.  And we deserve the same rights as everyone.”

Kefentse’s research is well timed as the country undergoes a sort of awakening to the humanity of Black people. She’s long participated in equity and diversity work as part of her practice, providing advice and guidance to leaders and organizations on matters around communication and race. Often discussions center on the uncomfortable dynamics of race and privilege that folks can find themselves in, or beliefs leaders may have that are in need of shifting.

When she feels challenged, she looks to her elders as motivation for moving forward.

“When I think about what my Grandmothers in Barbados were going through, this is nothing. My parents came from Barbados back in the ‘60s to make things easier for us, and it was hard on them. It’s now our job to move with the same momentum and make it easier for the next generation as well.”