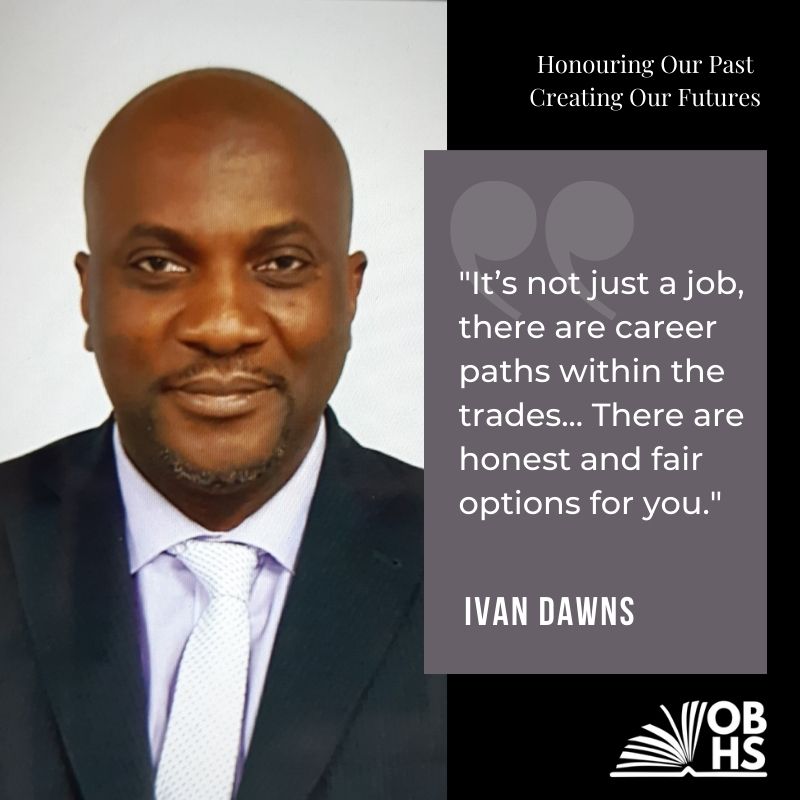 In 2013, Ivan Dawns became the first Black Representative for the International Union of Painters and Allied Trades in the province–and in the country.

Dawns worked on the construction site for 13 years before he made his transition into a leadership role in the union.

“I started as an apprentice and worked my way to journeyman status… my boss saw something in me, so I became the crew leader… I would always go to the union meetings and speak my mind,” he said

“I was active in the union…you can’t just sit down, pay dues and not take part.”

When a position in the union came, Dawns went for it and he was successful.

“When I just came off the tools I wasn’t sure if it was for me…then I went to battle for one of our members and I loved it–I knew I was in the right spot.”

For the last eight years, Dawns has been a leader in his union, representing thousands of skilled tradespeople across the province. His journey from the construction site to the office wasn’t necessarily planned, but it was certainly intentional.

Dawns lights up when speaking about his current position with the union. He’s passionate about taking care of his members, and goes out of his way to make sure they’re protected to the best of his abilities.

When Covid-19 was still new, especially during the spring, there were a number of concerns around health and safety within the construction industry that Dawns and other union reps had to navigate.

“In the beginning, one of our biggest concerns was the washroom situation, we went to all the job sites to make sure our members had the proper PPE and made sure the washrooms were clean and being sanitized frequently…We had to take the precautions for the members to be able to work six feet apart,” he said.

He experienced some pushback from the private companies. In those cases Dawns and his team had to make promises to call the Ministry of Labour to shut things down to ensure compliance.

Since the summer of Covid-19 and the amplification of racial awareness, Dawns noticed an increase in complaints to him regarding matters of discrimination.

“People are definitely feeling more comfortable to voice their concerns about racism here. Racism isn’t new in construction at all–I remember I would experience things, but I wouldn’t say anything…I’m not going to complain to [them] about [them], and I wanted to keep my job,” he said.

“But now that people like me are in this position, people feel more comfortable to tell me what’s really going on.”

The construction industry has had a long record of being a violent work environment for people of colour, and in the Trump era where certain ideologies were given a platform, the discriminatory behaviour was amplified. To combat these experiences, he urges his union members to speak up as soon as they experience problems.

“Sometimes people wait until they’ve been fired or things have gotten too out of control to tell me what happened. By then it’s too late, I can’t do anything–You have to speak up as soon as things happen, then I can step in.”

Despite the persistence of racism in the industry, he’s been encouraged by the ways leaders in the space are coming together to overcome this unfortunate reality.

“Last year we as union leaders all came together to try to make things better for our members dealing with racism…There’s no room for that,  if one of my members is involved with [perpetrating acts of ] racism, they’re out.” he said.

Dawns affirms that  despite this, the construction industry is continually becoming more reflective of the country, in terms of demographics, and that the sector continues to create opportunities for growth.

“We always need workers. I still have contractors calling for work; things are steady.”

Because of this he encourages youth coming up looking for opportunities to consider the trades.

“It’s not just a job, there are career paths within the trades. Not everyone is going to go to college or university. There are honest and fair options for you. If you’re looking for a career, we give opportunities to make a good living to take care of your family, have a comfortable pension–We can guarantee that.”

Dawns shares his story with youth, living as an example of the ways in which hard work, commitment and community involvement can pay off. He looks ahead with hope and pride in his industry, and embraces the opportunity to represent both his community, and his members.